In a digital age where social media and ‘selfies’ reign supreme, it was only a matter of time until digital photo booths were introduced into Quick Service Restaurants (QSR).  Burger King and Dunkin’ Donuts have become the latest brands to install a custom digital photo booth, using Moving Tactics Digital Impact, in their N1 City outlet in the Western Cape. 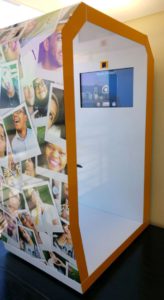 Moving Tactics, the leading South African digital signage solutions company, was employed to build a custom-designed, vinyl-wrapped, powder coated steel fabricated housing, into which a 32” industrial LED touch display, HD camera and PC have been installed to deliver a ‘selfie’ booth that needs no human interaction.

As kids enter the photo booth, pop-up prompts on the screen take them through a basic 3-step process to have their photograph taken. After the countdown that gets them ready to pose and smile for the camera, each image is digitally stored on a cloud-based server.  The photographed subjects are then given the option to share their digital image via Facebook, Twitter or email. All images are branded with the company logo before being sent to social media channels.

Andy Higginbotham, Creative Director at Moving Tactics Digital Impact, says, “This has been a great project for us to work on. These photo booths are very popular with the kids and in today’s day and age, the youngsters are very technically-minded and have no problem in quickly working out how the technology works.”