Clicks, the largest health and beauty-focused retail chain in South Africa, with more than 600 stores and over 450 in-store pharmacies nationwide, has partnered with Moving Tactics to install and roll-out a digital signage network within their Clicks Pharmacies nationally.

According to Ray Smeda, Head of Digital Media at Moving Tactics, South Africa’s leading digital signage solutions company, “The first phase of the digital signage installation at 130 Clicks Pharmacy stores was completed in March 2016; phase two at a further 120 stores was finished in October 2016; and an additional 150 stores will be done by October this year. Use of Software-on-Chip (SOC) technology that facilitates media players being built into the screens, which leads to less downtime and technical problems, resulted in a more streamlined installation and saved on costs”.

The digital screens, located behind the pharmacists, flight advertiser content an 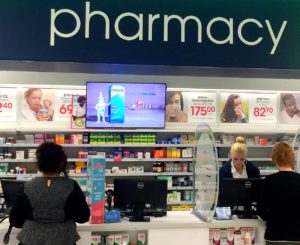 d infotainment to keep customers engaged and interested. “We have found that infomercial-style content that features information on pharmaceutical products, health-related facts, as well as health & lifestyle products and services, retain customers’ attention and result in higher dwell times of 49 seconds, with an average attention time of 21 seconds, resulting in a conversion rate of 91%.”

Feedback from customers has been positive and the consolidation of Clicks’ in-store digital strategy has given smaller suppliers and Schedule 0, 1 & 2 drug companies an opportunity to promote their products and services in this highly-regulated space. “Many of the smaller suppliers weren’t able to advertise their products before due to cost and content restrictions. These screens give them a chance to get their message across and build their brand awareness,” explains Smeda.

Mrs Lazeke, Pharmacist at Clicks Canal Walk store, says, “Since the introduction of the screens in the Clicks Pharmacy, I have experienced an increase in customers asking about advertised products. The customers are using the screens as a reference for new products that we stock and they have also assisted during peak times when the store is very busy as it gives customers the opportunity to remain occupied while they wait.”

The digital signage screens installed at Clicks Pharmacies complement and work together with those already installed in the main stores to create Clicks’ Shopper Journey for its customers. This journey is supported by a variety of display screens located at key positions to inform and engage with customers regarding Clicks’ promotions, supplier advertising and seasonal campaigns, starting at the shop front screens and ending at the till points, where an integrated queue management system has been incorporated.

According to Chris Day, Managing Director at Moving Tactics, “Again, it is all about presenting the right information to the right customer across the right platform, and the Clicks Pharmacy screens do exactly that.  The juxtaposition of location and infotainment-based content not only keeps customers entertained, informed and more patient at busy times of the day when queues might be longer, thereby increasing dwell time, but has a direct impact on customers seeking out those specific products promoted and increasing sales”.