According to recent research, 60% of Generation Z, who are by definition digital natives, prefer to purchase in-store. This may come as a shock to some but the challenge for retailers is how to make the best of in-store digital signage advertising sales and the shopper experience to capture these on-site customers and drive sales.

An often overlooked method of getting the shopper’s attention is to use in-store digital media sales to inform, entertain and drive revenue.  “Digital media advertising in the retail space isn’t always top of mind for marketers and retailers, however, we have found great success with several top retail brands in South Africa and the figures speak for themselves; but it’s not just about slapping up an ad on a screen, it’s about strategic content at the right time and the right place,” says Ray Smeda, Head of Digital Media at Moving Tactics, South Africa’s leading digital signage solutions company.  Moving Tactics who manages the digital media sales and content development for retailers such as Clicks and Edgars suggests five key strategies:

Have a strategic reason for your advertising – know who you’re targeting, when they shop and what they want. Experience shows that the best in-store digital advertising opportunities that translate into increased sales are: promotion with gift; product price promotion; or a new product launch.  Always include a price as part of your content and take advantage of having a captive audience while they’re in your store. 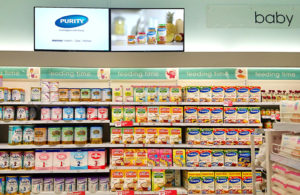 Retail business decision-makers are increasingly recognising the value of data and insight-driven decision-making. Data retrieved via Retail Analytics software linked to in-store digital screens prove that 33% (1 in 3) of customers notice the screen content and pay attention to it for 9-11 seconds.  So instead of running one long advert in a 10-minute communications loop, rather place two 15-second adverts in that same time period.  It not only increases brand awareness but also improves the probability of being seen and noticed.  However, at till points, up to 100% of customers pay attention to and notice the screens.

Keep the content simple, minimalist and visual. Consumers appreciate simplicity and our brains respond well to patterns, such as three word sentences, groups of ideas and an image that makes contextual sense. Don’t bombard consumers with lots of wording, imagery and moving graphics. Too much is simply, too much.

5. Use Dwell Time to your Advantage

Customers who spend time in queues, whether it be at a till-point or when waiting to see the pharmacist, are a captive audience. Between 96-100% of shoppers pay attention to screen content when dwell time increases.  Another recommendation for retailers would be to implement a one-minute per category rule to retain interest and keep content fresh. Infotainment mixed in with advertising and informative content breaks the monotony of waiting in line and cuts perceived wait times.

Having implemented dual networks for Clicks, Smeda says that understanding the consumer profile in a specific space within the store is important. “We have installed their front of store network that offers a digital presence within their top 50 performing stores (nationally and internationally) whereas for their Pharmacy network, we’ve used a more focused digital advertising approach in their 400+ locations”.