Since mid-March the South African government has been advocating social distancing to reduce the spread of COVID-19 and, as a result, flatten the curve of infection. These measures have become even more stringent after the country went into lockdown on 27 March. As the public are only allowed to leave their homes to obtain medical assistance, or purchase medicines or groceries, the onus has been placed on retailers to step up and enforce the 1-metre social distancing rules within their stores to ensure the safety of their staff and customers.

An area that retailers are focusing on is th 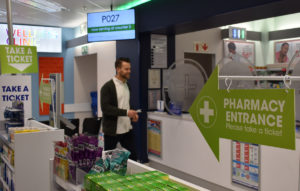 eir queueing system, where close contact is most problematic, and they’re turning to technology to assist with social distancing rules. One retailer using technology to socially distance their customers is Clicks, South Africa’s leading pharmacy, health and beauty retailer.

They initially implemented a Virtual Queue solution a couple of years ago to allow their customers to check in, maintain their place in line, and be notified when it’s their turn for service. Customers can also opt in for an SMS notification that lets them know when it is their turn in the queue. Ultimately, removing the need for customers to physically stand in a queue.

According to Scott Matthews, Head of Moving Tactics Retail Analytics, Clicks Pharmacies initially installed the virtual queue management system to reduce the amount of time their customers spent waiting and allow shoppers to wander around in-store and continue to shop while they did so. “It was initially developed to satisfy one need, however, in our current health emergency, it has been integral in enabling social distancing within their pharmacy areas, where there is the greatest need for social distancing,” says Matthews.

Over the last couple of years, the Virtual Queue solution has been implemented in more than 280 Clicks Pharmacies in South Africa, which includes their top stores such as the V&A Waterfront, Gardens Centre and Canal Walk, as well as in stores in Swaziland.

“By employing virtual queuing, retailers are in a position to seamlessly introduce the new social distancing measures, which some experts believe will need to be in place for the next couple of years. In this way, solutions like virtual queueing may become the norm for retailers and shoppers,” concludes Matthews.