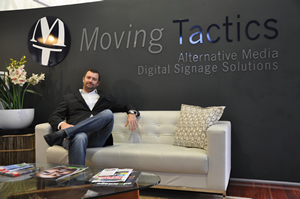 Chris Day is the Co-Founder and Managing Director of Moving Tactics SA. The company was started in July 1997 and has since grown to become an industry-leading service supplier of Digital Signage Solutions in South Africa. The last 10 years has seen the significant global growth of Digital Marketing and Moving Tactics has kept up with the latest technologies and software – Moving Tactics has recently been granted the rights to the internationally acclaimed X2O Media software for the African market.

With over 16 years of executive leadership, sales and marketing experience, Chris Day developed the company from one that initially serviced mainly the 16 to 24-year-old student demographic through electronic signage at tertiary institutes to one that serviced the largest student medium in South Africa. In 2006, Moving Tactics sold the Student Division to Primedia and Chris Day was seconded to New Campus Media as Marketing and Sales Director. He then launched Campus TV with his partners, which doubled the turnover of the business. At the end of 2008, Primedia bought back his remaining shares and in January 2009, Chris returned to Moving Tactics full-time and continued with the company’s new strategic focus on the retail Digital Signage sector. 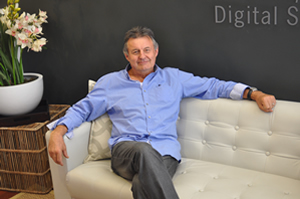 Having relocated from the UK in 1975, Nicholas Matthews worked together with Chris Day to develop Moving Tactics from its starting point in 1997.  Through the years, he has been a part of the immense growth of the business and experienced the development of the industry from mobile billboards and backlit scrolling displays to today’s leap into the digital signage arena. 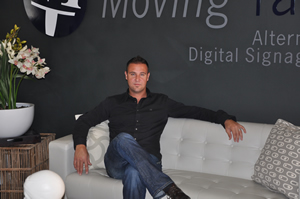 Raymond Smeda is the National Network Director and a Shareholder of Moving Tactics SA.

Since graduating from Fairbairn College in Cape Town, and furthering his studies at Cape Technikon, majoring in Business Management and Accounting, he went to further his knowledge and expertise by moving abroad and pursuing a career in the Marketing and Sales Industry. He landed his first position with a property group called Lloyds of London, based in Central London.

After a couple of years of working in the United Kingdom, his career progressed and his focus turned to opening his own Property business, called APS Properties. After managing a successful high profile property portfolio for 4 years, within the Wimbledon, Putney and Chelsea areas, Raymond decided it was time for a sunny change, so he sold up, and returned back to Cape Town to settle down. 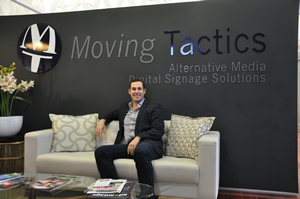 After graduating from Fairbairn College in Cape Town, Kevin went on to study Architectural and Mechanical Drafting, but as his career progressed his focus shifted to Information Technology and he has since completed many IT courses including the Certified Digital Marketing course through Quirk

Education. Kevin’s career has incorporated an exciting mix of corporate and entrepreneurial positions, which has allowed him to explore the many and varied opportunities in the Digital world.

Kevin joined Moving Tactics in June 2012 and brought with him his enthusiasm for and years of experience in Digital Media. He has been involved in Information Technology since 1995 when he joined Denel Informatics as Sales and Marketing Manager. Over the following 18 years, his experience in the industry was strengthened through his various positions at companies such as IBM, Asiakon SA (Technical Director), InfoSkill (IT Consultant) and as Accounts Manager at Ethniks Systems, where he produced and directed lifestyle TV and corporate communications for Woolworths SA, via their media channel network. In June 2007, Kevin founded Puhmp Digital Media, a Digital advertising company specialising in Digital Signage solutions, and at the same time started working for Woolworths as their In-Store Digital Media Channel Consultant and was responsible for the implementation, management and strategic direction of their in-store retail and corporate communication media channel network. His involvement included the countrywide project management of Woolworths’ media networks and the implementation of Digital Media channels that incorporate vendor management. Working within the retail marketing environment for more than nine years gave him a unique digital perspective and he has seen the immense growth of Digital Media and application thereof first-hand.

After almost 5 years spent at Woolworths, Kevin was brought on board at Moving Tactics and hasn’t looked back. “I enjoy been part of an ever growing industry, where I continually learn more about and play a part in expanding traditional digital signage into interactive Digital Media. This really inspires me. The ability to dynamically deliver the right content to the right person at the right time intrigues me. It is an exciting time and an exciting industry!” says Kevin. 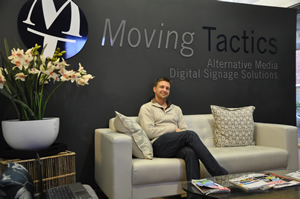 After completing Matric at Reddam House in Tokai, Wesley took a gap year and traveled extensively up until 2004 when he began his studies at the Institute of Marketing Management and subsequently earned a Diploma in Marketing and a Degree in Business Management.  During the course of this period he started working as the Promotion Coordinator for a company called Campus Media, which was when he met Chris Day. Campus Media specialised in Promotions, Activations and Campus Television. It was during this period that Media and Advertising paved its way into the Digital era, which is where he seized the opportunity to join Moving Tactics in Digital Signage Solutions.

In 2005, he started as an IT Technician, Graphic Designer and Digital Signage installer for Moving Tactics. Over the next few years, he grew within the company in the fledgling Digital Signage industry and it was in 2010 that he was promoted to the National Infrastructure Manager and then later became the Head of Technical in 2012.

The Technical Department is responsible for all installations, maintenance, network design and prototyping and continues to grow and outpace its competitors at every turn.

To wind down after a hard day’s work, Wesley prefers to Cycle and Run competitively. “I believe anything is possible and there are only solutions never problems. Work hard but don’t forget to play hard either!” 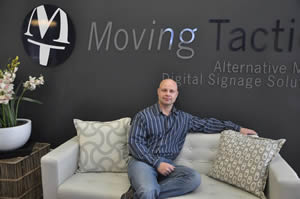 Willem grew up in Newcastle in Kwa-Zulu Natal where he was schooled and completed his studies. He first started working for Mital in 1997 where he qualified in Industrial Instrumentation and Process Control.  In 2001, Willem took the big step by moving to Johannesburg where he began working for MTN and Flight Centre as a Systems Engineer and advanced quickly, becoming the IT Manager for Flight Centre SA’s operations in 2002.

He started his own Digital Signage company in 2004 with two other partners and was actively involved with the roll out of several national signage networks. He sold his shares in 2009. His company portfolio included successful digital networks such as American Express, PEP, Flight Centre and Pentravel.

Willem has an adventurous side and enjoys the outdoors; in 2009 he completed his pilot’s licence allowing him to spend his weekends at 6000ft in the sky to clear his head. He loves technology and the impact it’s making in our lives, both changing and improving it. Willem is motivated, self-driven and passionate about his work and the industry he is in. He is very patient and accepting of people and their flaws and never judges a book by its cover.

When discussing Digital Signage as a business solution, Willem responded “Digital Signage is still perceived as this “complicated, unmanageable, waste of money solution” by many. This cannot be further from the truth. Digital Signage is simple and if done correctly can give your business a major boost and take communication to your clients and staff to a totally different level. All the research proves this. I am here to explain the benefits of Digital Signage and make Digital Signage easy, without the technical jargon. I will assist in building a customised Digital Signage network that will work for a client’s unique environment”