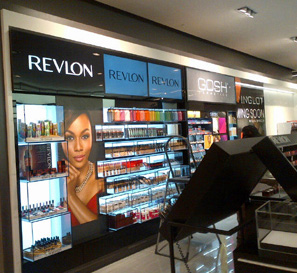 Revlon South Africa is rolling-out additional in-store digital signage at its outlets in Edgars and Woolworths, in collaboration with Moving Tactics.  A world leader in cosmetics, fragrance and personal care, Revlon has effectively been using brand communication and strong in-store digital media to drive their brand awareness and positive sales performance.

Nikki Fletcher, Merchandising Manager at Revlon, says “Our experience with digital signage proved to us that in-store digital media really works to create and increase brand and product awareness amongst our customers, and we could see a direct correlation between products advertised through this medium and our sales turnover. We also felt that the glamour, excitement and innovation that Revlon is known for, was reflected through the use of this high quality, sleek and stylish technology in our outlets”.

As the preferred digital signage supplier for the Edcon Group, Moving Tactics has worked with Revlon to implement a digital signage network, which incorporates two 40-inch Samsung screens in six Edgars stores, with more to follow by the end of 2013.

The use of in-store digital media in the cosmetics industry is growing worldwide and retailers have seen the benefits of implementing these systems in the retail environment first-hand. Research conducted by FGI (2012) on Edgars’ digital signage system confirm that 41% of shoppers were influenced to purchase something in-store, based purely upon the advertising on in-store digital screens.  This increase in purchasing has led to a 70% increase in sales in those stores employing digital signage.

Kevin Bierman, Head of Digital Signage Solutions at Moving Tactics SA, says, “Clients are always impressed with the impact effective digital signage has on their sales figures and once this effect is seen, retailers are keen to continue rolling-out their digital media platforms within their stores to not only benefit their brands, but also the experience offered to their customers”.