Edgars has appointed Moving Tactics as its holistic in-store digital signage and media partner as it launches its new ‘open experience’ retail concept with its flagship store opening at Fourways Mall in Johannesburg. Moving Tactics, South Africa’s leading digital signage solutions company, had previously worked with Edgars, and their associated clothing and cosmetics brands, prior to the relaunch, to implement in-store digital media experiences for its customers.

Edgars relaunched its brand in 2018 and is committed to providing customers with an experiential shopping environment. “Internationally, retailers are purposefully rewiring themselves in the ever evolving retail landscape to enable the ‘experience economy’,” Edgars said.

The concept of creating entertainment through shopping and socialising is enhanced and supported by Moving Tactics’ digital signage installation. It includes point-of-sale signage, pillar screens, touch screen kiosks, convergence area screens, in-store music and large-impact staggered video walls that accompany the customer on their journey through the store.

The new 8,000m2 Edgars Fourways Mall store, has been upgraded with over 65 screens in various sections of the store including unique screen placement at Point of Sale. The Point of Sale screen content is synchronised to the nano-second to create seamless flow over a staggered six-screen video wall solution that captivates the customer. 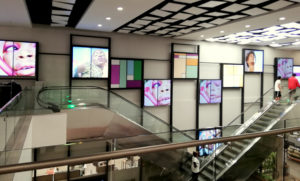 To complement the captivating visual display, Moving Tactics has also installed and a five-zone Digital Audio Solution, across Ladieswear and Cosmetics, Menswear, Kidswear, Spa and Café. The Audio solution has been professionally designed so that there is no audio interference between departments, creating an uplifting shopping experience for the Edgars customer.

“As part of the Customer Audio and Visual Journey, we are also testing various interactive digital solution such as Digital Mannequins to allow customers to visualise the current fashion trends. And in the kids department, Kids Digital Gaming tables have been installed to keep them entertained during shopping expeditions,” Kevin Bierman, Head of Digital Signage Solutions at Moving Tactics.

Moving Tactics, who has partnered with Edgars for almost a decade, says they’re proud that the relationship has been reaffirmed for another five-year period. “We are even more excited to be part of Edgars’ new retail concept stores and to fulfil our mandate that includes in-store digital signage, radio, digital media sales, in-store activations, content development and a full in-house print service. All our technologies, except for the mobile kiosks, run via System on Chip (SOC) technology that facilitates media players being built into the screens, which leads to less downtime, resulting in a more cost-effective installation that integrates all the channels and content seamlessly.

“To date, we have completed digital signage and audio installations for Edgars at more than 150 stores nationally and we’re currently aiming at completing the last few stores for a spectacular customer experience during the festive season,” concludes Bierman.